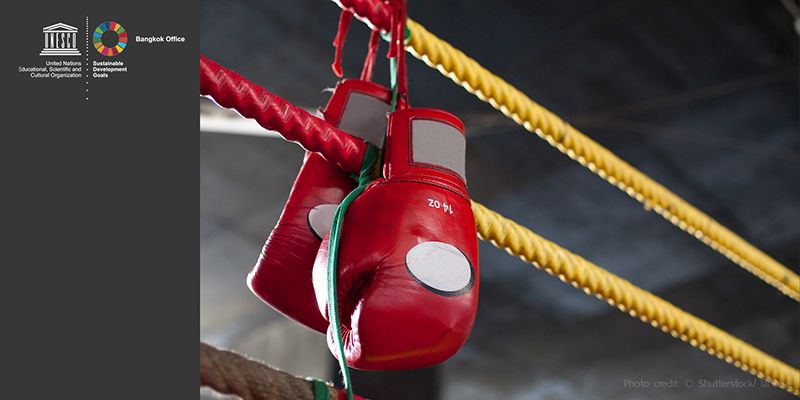 As a supporter of youth empowerment and safe sport participation, UNESCO is saddened by the death of 13-year-old Muaythai fighter Anucha Thasako.  Despite the efforts of the medical team at Samutprakarn Hospital, Anucha died after he was knocked out in the Muaythai ring in Thailand’s Samut Prakan province. His death is both a personal tragedy and also adds urgency to the campaign for safeguarding youth in all sports.

Discussion on the participation of children and adolescents in martial arts is quite controversial and elicits a wide range of reactions. As with many sports, the risk of injury, especially head injury, is a key concern.

The International Federation of Muaythai Amateur (IFMA), the sport governing body of amateur Muaythai consisting of 130 member countries, adheres to very strict rules for youths participating in the sport, including an absolute ban on strikes to the head for participants 11 and younger, and limits strikes to the head for those 12 and older, also requiring the use of protective gear. But there is always some risk.

While IFMA supports regulated participation under close supervision and with strict safety guidelines, the federation is unequivocally opposed to children competing in professional fights. In Anucha’s tragic case, through no fault of his own as a minor, his Muaythai experience did include paid fights, reportedly out of financial necessity, which has prompted Thai authorities to review regulations for the sport involving minors.

Martial arts are practised all over the world and participating can be very appealing for youth who want to appear tough and independent. IFMA started an initiative called ‘Sport is Your Gang’ in 2012, specifically aimed at providing opportunities for youth from challenging backgrounds. More recently, UNESCO partnered with IFMA and the International Centre for Martial Arts and Youth Development (UNESCO-ICM) in Korea to conduct a study on the effectiveness of martial arts in youth development.

International expert Dr Colin Higgs, Professor Emeritus at Memorial University in Newfoundland, Canada, carried out a comprehensive study on what we know about sport and youth. Head injuries are one of the key concerns in the design of these initiatives, and there is a global movement developing safeguarding standards for children in all sports.

UNESCO and the partners have used the study to develop a publication to help sporting federations and community organizations develop youth programmes using martial arts that promote positive psycho-social development, values and safety. This guide promotes the use of 12 draft standards for youth and martial arts programmes. Given the importance of safety, this is the second standard, after the establishment of a policy laying out the purpose of the programme.

The standard on safety is based on the Draft International Standards for Safeguarding and Protecting Children in Sport. It calls for a range of measures including adequate supervision, use of safety gear and organizational rules relating to youth participation.

Amid other considerations for youth development through sport, the draft standards are also very relevant to this recent case. Children’s participation in Muaythai, even in professional fights without proper safety gear, continues to be defended on the basis of the acknowledged cultural significance of the martial art. The draft standards acknowledge this aspect: ‘Given the strong connection between martial arts and culture, understanding the heritage of the tradition of the sport and the community heritage from which it grew is intrinsic to developing a deep connection to the sport.’ That deep connection felt towards Muaythai is indisputable, but must be reconciled with the primary priority of safety.

In the case of youth participation in sport, particularly in martial arts that intrinsically involve an element of physical risk, it is the responsibility of adults – not children – to ensure that risk is minimised to the fullest extent possible. The IFMA’s position firmly states that fights involving children, such as those that Anucha participated in and the one that resulted in his death, should not be allowed in the first place. It is a failure of regulatory authorities the moment a child steps into the professional ring. For general participation in Muaythai, just as in any martial art practised worldwide, a comprehensive policy to protect children and youth participants, adequate supervision and protective equipment are all necessary to reduce risk.

The standards are to be further developed by UNESCO in partnership with IFMA and UNESCO-ICM in 2019. This comes as a timely contribution in efforts to prevent injuries and death among young fighters everywhere.

* This article was originally posted in The Bangkok Post