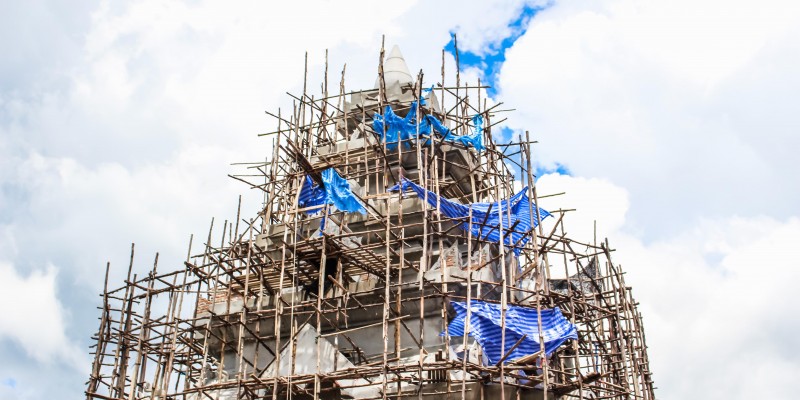 Materials scientist Dr Nuanlak Watsantachad recalls doing conservation work amid abandoned ruins in the middle of a European winter. “That was a tough time; however, it was not considered something women could not do.” Women also made up 80% of a conservation team at Mesa Verde National Park’s Cliff Palace, the largest cliff dwelling in the United States. The team had to climb up and down the cliff daily to do their work, but the main challenge came “when we needed to go to the toilet on the other side of the cliff”.

Conservation is one of several professions rife with male-dominated stereotypes – the dust covered male archaeologist excavating a site, for example, but as Dr Watsantachad’s illustrates, the reality, is far different.

The Thailand-born materials scientist with a master’s degree and doctorate in historic building and material conservation has been active in the conservation field since 1996. She has been a consultant on several domestic and international conservation projects, as well as a guest speaker, journal editor, author, and researcher for youth forums and academic institutes.

She says when it comes to question of gender and potential bias in her field, the work always comes first.

“I may be lucky that I have not directly encountered pressure or discrimination during my time in university or at work,” she says. “There are some occasions that I face people who judge others by gender and age. Nonetheless, I believe that the work quality can, in time, speak for itself, and people can always see through these superficial barriers.”

‘RESPECT IS KEY ABOVE ALL’

Although Dr Watsantachad has not personally encountered discrimination on the basis of her gender in carrying out work, she recognizes that female conservators still face challenges as a result of traditions, beliefs or ways of living.

“For example, Buddhist-Brahmin communities do not agree with women climbing on ancient monuments, entering the inside of pagodas or touching a Buddha image’s head. In some places, this is taboo,” she says. “But unlike many, I do not see this as an issue of sexual discrimination.”

Such beliefs were born over time, she says, and developed out of a belief that these proscriptions would keep women from “disgraceful situations” and maintain order in certain cultural contexts.

“Part of being a monument conservator is helping to sustain belief systems or spirit of place, which is one of the attributes used to determine a heritage site’s authenticity,” she says. “Therefore, it is a part of the job to acknowledge the existence of local practices.”

Showing such respect for local practices and tradition bearers can greatly ease any reservations community members may have about women in conservation, Dr Watsantachad says.

Growing up in Thailand, for example, has given her a “common sense” approach to culturally appropriate conservation work at religious sites. “For example, when conserving Buddhist temples, I always make merit to monks and pay homage to the Buddha images and local sacred icons before starting work, putting my different beliefs aside,” she says.

Such expressions of respect help increase public awareness of the site’s significance, says Dr Watsantachad. “Local people understand more that conservation is needed to protect their temples, and they are likely to grant access to conservators and workers to work on religious sites, regardless of their gender.”

Along with the field opening up to more women, Dr Watsantachad has seen significant changes in cultural heritage conservation in Thailand and says awareness of the importance of this work is growing in the country.

“I’m not saying that in the past it was bad,” she says. “I have learned from years of working with different local authorities and workers that everybody has good intentions, and has attempted to achieve the best practices in conservation while facing limitations in knowledge, resources, technologies and funding.”

One challenge many in the conservation field face is choosing which approach to take when. “A method of conservation may be suitable and acceptable in a certain circumstance, at a certain time. But when more knowledge and tools are available for us to learn other strategies, we should not blame what has been done, but should accept that we won’t do it again.”

Modern developments including partnerships with the private sector and individuals in heritage conservation, a more systematic use of research data and advances in communication and knowledge systems have all improved conservation efforts in Thailand. The latter, she says, facilitates record keeping to document processes used and results to ensure consistency and build on lessons learned, as well as to ensure public access and greater transparency.

“Thai professionals can use such provisions to improve the standard of site condition assessments, and have sufficient research to back up decisions on conservation methods, two areas in which we are now lacking but which are very vital to efficient time and funding management,” she says.

Dr Watsantachad is excited about these developments, both as a heritage worker and, a professor training the next generation of those in the field, and as someone “who appreciates the value of cultural heritage and the wisdom of forebears.”

“It is a dream comes true to see people, regardless of their age, gender or education background care and want to find ways to save our heritage sites,” she says. “Participation in heritage conservation should not be discouraged by laws, administrative restrictions or biases toward genders, races or classes. It is important to create an inclusive sense of ownership around heritage to make protection sustainable.”